Since it opened in September 2008 as the "world's most modern training center" at the site in Tonndorf, the Olympus Medical Training Center (OMTC) has become an indispensable part of Olympus. And the success story continues...

Perfect training environment for employees and Healthcare Professionals and Organisations.

Over the past ten years, the total number of trainings in the OMTC has almost tripled from 47 to 130, while the number of participants more than doubled from 498 to 1022 over the same period. Yet beyond these sober facts and figures, the actual success is reflected in the positive feedback provided by the training participants and, especially with regard to the quality of the training offered, the OMTC has earned an excellent reputation among its employees and trainers.

The training center not only enables Healthcare Professionals and Organisations to free themselves from the distractions of everyday business so that they can concentrate fully on the offered training, but also raises the awareness of Olympus employees for specific customer needs. This is a key reason why Olympus field sales representatives are rated so highly by our customers in Customer Satisfaction Measurement surveys.

Nevertheless, the OMTC is even recognized well beyond EMEA boundaries. In the past decade, people from a total of 50 countries have participated in OMTC training. But

“the success of the OMTC would not have been possible without the staff both in the frontline as well as those active behind the scenes,”

“The trainers and the training center management staff all already embody Olympus’ new global Core Values: Empathy in caring for the people involved in each meeting to be successful, Long-Term View in supporting activities that bring long-term benefits to customers and Olympus employees, and last but not least, Unity in fostering a real team spirit to achieve the best results.”

What does the future hold?

The demand for training continues to grow. For the OMTC it means that it will relocate from its current location in Tonndorf to the new Olympus EMEA headquarters in Hamburg-Hammerbrook, which is currently under construction. After all, a key integral part of the new headquarters will be a state-of-the-art training center. And with an area of 2,500 m2, more than twice the space of Tonndorf will be available.

“With the new training center it will be possible to bundle all training courses in EMEA at one location. The very modern equipment and the professional staff and trainers will create even more efficient and effective learning structures for all training participants.”

The OMTC is the largest, but not the only Olympus training center in Hamburg. The newest facility is the Training & Education Center Hamburg West (TEC) – directly opposite the Agaplesion Diakonie Hospital in Eimsbüttel.

Since 2015, the TEC has provided an ultra-modern training and education environment on 145m², primarily for doctors and nursing staff. Between April 2017 and March 2018, around 400 participants from all over the world were acquainted with our EVIS EXERA III and VISERA ELITE II endoscopy systems – including 3D and 4K technology – both theoretically and practically. In addition, the adjacent Agaplesion Diakonie Hospital serves as a reference center for EndoAlpha, Olympus’ OR integration system.

While Surgical courses are mainly held at the TEC, Olympus primarily conducts medical endoscopy training at the Endo Club Academy (ECA). The ECA is located on the grounds of the Eppendorf University Hospital and has been in operation since 2011. More information at: http://www.endoclub-academy.com 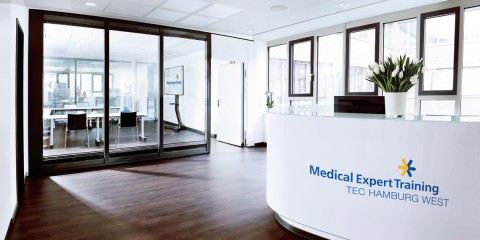 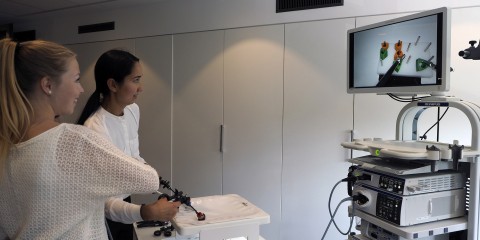 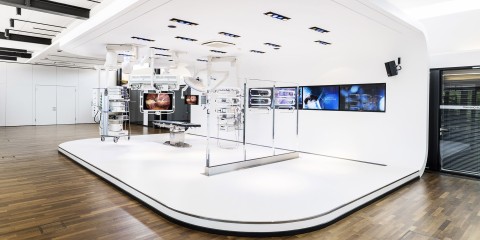 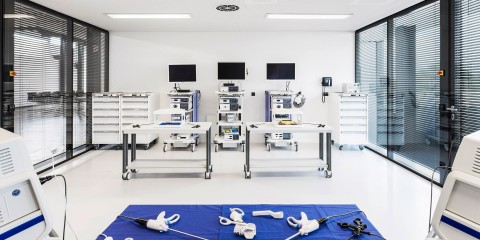 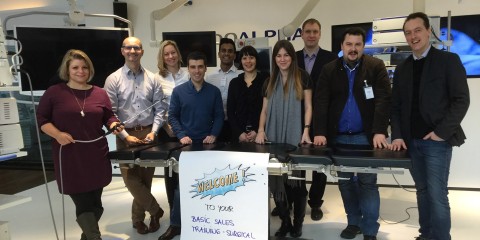 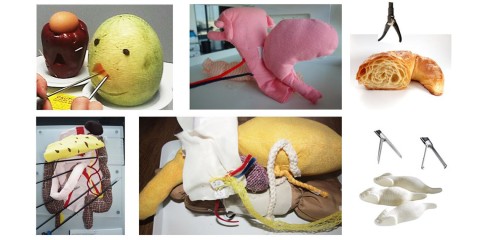 The TEC facilities can be flexibly partitioned thanks to movable walls. This enables, for example, CDS training, i.e. reprocessing training on the ETD 3 reprocessor.

Hands-on: Medical specialists in particular, but also employees, train the practical handling of the latest Olympus equipment at the TEC.

OMTC opened in September 2008 as the "world's most modern training center" at the OSTE site in Tonndorf.

Perfect training environment for employees and Healthcare Professionals and Organisations.

For many new employees the first step in their new job: participants of a Basic Sales Training - Surgical.

Learning together on a model.

Creativity is required in the design and selection of training models. Here are some examples from ten years of OMTC.

All press releases All stories